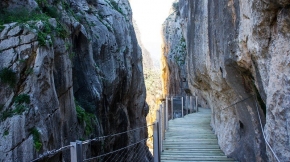 Chilling at the pool, hiking in unspoilt nature, exploring cultural heritage or strolling in the typical white Andalusian villages. That's your holiday at Casa Sarandy!

What does Andalusia have in store for you?

Until recently, this almost 8-kilometre "King's path" path was considered to be one of the most dangerous in the world. Today the entire route has been carefully restored and although it's now much safer, one thing hasn't changed - the unique experience of strolling along walkways hanging over 100 metres up on a sheer cliff face. Take one of the best selfies ever. You'll never forget the views!

Please note that you have to buy tickets in advance. 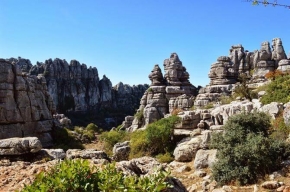 Most geologically stunning of all of Andalucía’s natural parks, El Torcal de Antequera Natural Park Reserve has a surreal, almost eerie feel to it. Here millions of years of wind and rain erosion produced some of the most spectacular limestone scenery found anywhere in Europe. There are three set routes through the reserve. A green (1,5km), yellow (3km) and red one (4,5km). Defenitely a fantastic day out for the whole family. 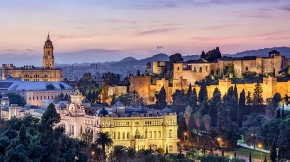 Málaga offers a great variety for tourists, as you can enjoy its extensive beaches, its many historical monuments, its diverse museums, and a wide variety of leisure activities for all tastes. The historical centre of Málaga is practically all pedestrianised; therefore, you can enjoy a pleasant walk and see all the main sites of interest. But if you prefer, you can also go on a bike or even a Segway.

If you’re thinking about visiting Malaga, here is a list of some must-see places to visit during your stay: Gibralfaro Castle, La Alcazaba fortress, Atarazanas Market, The Roman Theatre, the Cathedral, Picasso Museum, ... . 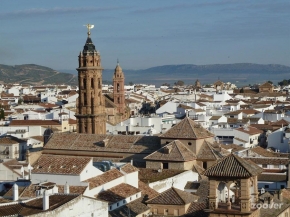 A visit to this historical Andalucían town Antequera is a journey almost 5,000 years back in time, beginning with the Bronze Age and the native Iberians. The timeline is there to be followed in this fascinating city's profusion of burial mounds, dolmens, Roman baths, a Moorish Castle, Gothic churches, Renaissance fountains and baroque bell towers.

Ideal to combine with a visit to El Torcal. 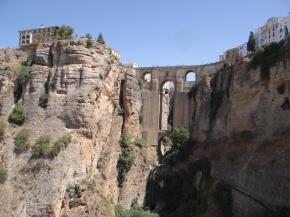 Ronda is one of the oldest cities in Spain and is best known for the Puente Nuevo. This bridge over the El Tajo gorge is almoust 100m high and connects the districts Mercadillo and La Cuidad. Because of its unique location Ronda offers you many spectacular views over the surrounding mountains and valleys. Also take your time to visit the Plaza de Toros, one of the oldest en most beautiful bullrings of Spain. Stroll across the cozy squares, go shopping or enjoy breathtaking views during a walk in the gorge. 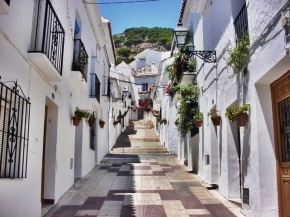 Perched on the hillside high above the sea, Mijas Pueblo is a perfect example of a traditional whitewashed Andalusian village. The pueblo has managed to retain a very authentic Spanish feel and although now a major tourist attraction, it has definitely not compromised its charm.

Enjoy the unique view over the Costa del Sol, discover the typical andalusian cuisine in the many restaurants, visit the smalles chocolat factory of the world or take a walk in the stunning nature around the village. 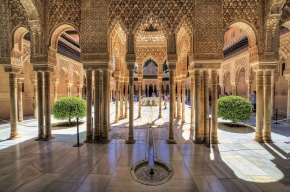 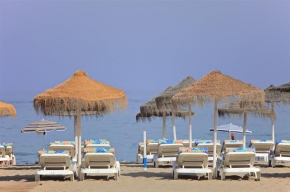 A good alternative to the often busy beaches is a day at the lakes Casasola, El Chorro, Viñuela or Iznájar. Here you and your family can cool down in a beautiful, natural environment. 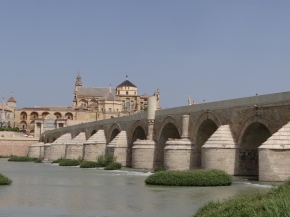 Washed by the Mediterranean Sea, the Costa del Sol extends along more than 150 kilometres of coastline in the province of Málaga. Its name, the “Coast of the Sun”, is not due to mere chance: with over 325 sunny days a year and a benevolent climate, this is a paradisiacal place with beaches to suit all tastes.

Granada is the soul of Andalusia, a place of breathtaking beauty at the foot of the Sierra Nevada Mountains. This mystical city was the capital of a Moorish kingdom from the 13th until the 15th centuries. The Nasrid Dynasty reigned with a splendor unlike anywhere in the medieval world. The hilltop fortress of the Alhambra Palace was a paradise of greenery, rose gardens, and endlessly flowing fountains. After flourishing for centuries, Granada became the last bastion of the Moors in Spain when the Catholic Monarchs captured the city in 1491. Although now predominantly Christian, Granada has inherited rich Islamic, Jewish, and Gypsy influences. The Renaissance Catholic cathedral was once a mosque. The Albaicín (old Moorish town) and the Alcaicería (spice market) have an authentic Arabic flavor. Colorful Gypsy culture and fabulous flamenco dancing is found in the caves of the Sacromonte quarter.

One building alone is reason enough to put Córdoba high on your itinerary: the mesmerising multiarched Mezquita, one of the world's greatest Islamic buildings. But today's Córdoba is much more than the Mezquita. Córdoba's real charms unfold as you explore the winding, stone-paved lanes of the medieval city to the west, north and east of the gaudy touristic area immediately around the Mezquita, wandering between wrought-iron balconies and lamps, potted plants, overhanging trees, golden-stone buildings and verdant interior patios, emerging every few minutes on yet another quaint little hidden plaza.